To mark the end of 2019, NAMRIA, with the Support Services Branch (SSB) as host, held its year-end assembly on 18 December 2019 at the agency’s Covered Court, Fort Bonifacio, Taguig City. The event was celebrated with the theme Christmas in NAMRIA Land. The festivities began with a holy mass officiated by Rev. Fr. Harley B. Flores of St. Michael Parish Church.
SSB Director Febrina E. Damaso delivered the opening remarks and welcomed the agency officials, employees, and guests to the event.  She thanked the NAMRIA Branches for actively participating in all activities for this year’s Christmas celebration.
In his inspirational message, NAMRIA Administrator, Usec. Peter N. Tiangco, PhD, extended his appreciation, and congratulated all employees for another successful year for the agency. He also highlighted NAMRIA’s accomplishments in the past year, including the agency’s international engagements; continuous modernization of the Philippine Geodetic Reference System (PGRS); participation in the National Task Force for the West Philippine Sea; contribution to the draft house bills fixing the final forest limits of the country; continued certification to ISO 9001:2015; and the conduct of various HR best practices on learning and development, and morale and welfare.
DENR Secretary Roy A. Cimatu was also in attendance as the event’s Guest of Honor. He commended the agency for its valuable contributions to the priority programs of the government. He cited NAMRIA’s best practices on hazard mapping and its assistance to the rehabilitation of Boracay Island and Manila Bay.
After the messages, NAMRIA employees were treated to ice cream and taho snack food while entertainment numbers were provided by the NAMRIA Day Care, NAMRIA Chorale, and the NAMRIA Band. NAMRIA Administrator Tiangco gave gifts to the NAMRIA Day Care children and there were also raffle draws.
The NAMRIA Branches were also recognized for their participation in the contests on this year’s theme. The Mapping and Geodesy Branch (MGB) was awarded as the ‘Most Participative Branch’, while the Geospatial Information System Management Branch (GISMB) was given the ‘Best in Headdress’ award. The winners of the Christmas Hallway Contest were the following: Resource Data Analysis Branch (RDAB) - first place; Hydrography Branch (HB) - second place; and the joint entry from the Administrative, (SSB), Cartography (MGB) and Reprography and Printing (MGB) Divisions - third place. The year-end assembly was co-hosted by Ms. Zenaida A. Leaño and Mr. Conrado F. Apolonio of SSB.
Reverend Father Flores officiates the Eucharistic celebration. -- ERWIN D. FAMATIGA
SSB Director Damaso gives her opening remarks. –- VENER QUINTIN C. TAGUBA, Jr. 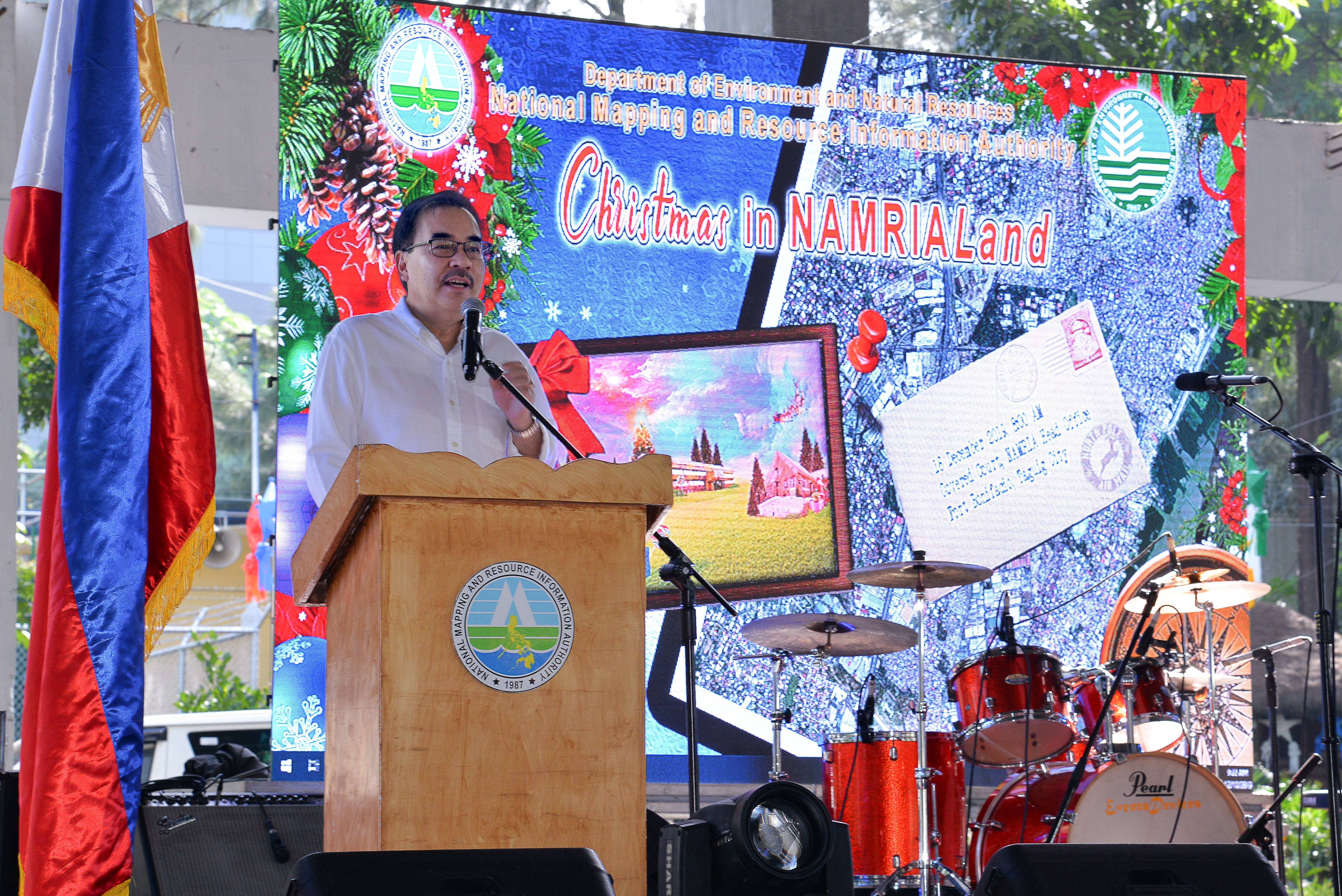