The commissioning orders signed by DENR Secretary Paje and read out by NAMRIA Hydrography Branch (HB) Director Commodore Jacinto M. Cablayan  state that both survey vessels are directed to start their active service as hydrographic survey vessels of the Republic of the Philippines effective 01 June 2015.  They also specifically instruct both vessels to conduct hydrographic surveys and oceanographic observation of the Philippine waters and other activities as may be ordered by the command or higher authorities.

Lieutenant Commander (LCdr.) Antonio G. Valenzuela, commanding officer of BRPH ANDRES HIZON and LCdr. Apolonio M. Lagonsin, commanding officer of BRPH CAYETANO PALMA read their respective assignment order and acceptance of command. After assuming the command, the respective commanding officers instructed their executive officers to break the flag.   The breaking of the flag is part of the commissioning ceremony wherein the flag of the guest of honor is hoisted at the vessel’s main mast with the DENR hymn in the background. This activity demonstrates respect and acknowledgement of the guest of honor.  The final part of the commissioning ceremony was setting the watch wherein the executive officers ordered their navigating officers to take the first watch as officers of the deck while the rest of the survey vessels crew proceeded to their watch stations. The officers of the deck of both vessels took their station and made the first entry in their corresponding vessel’s logbook, “The ship is now officially commissioned.”

Presentduring the ceremony were the executives and key officials of DENR and NAMRIA; HB senior and junior commissioned officers; survey vessels crew; and family members of former Bureau of Coast and Geodetic Survey (BCGS) directors, Captain Andres O. Hizon and Commodore Cayetano C. Palma.The NAMRIA survey vessels were named after the two former directors of the BCGS, which happens to be one of the agencies that merged to form NAMRIA by virtue of Executive Order 192, series of 1987. 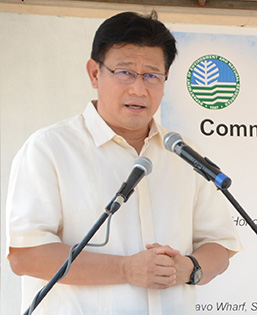 Secretary Paje highlighted in his message the importance of the survey vessels as great additions to the wherewithal of NAMRIA particularly in defining the country’s Extended Continental Shelves (ECS), Exclusive Economic Zone (EEZ), and in the conduct of bathymetric studies.  He commended NAMRIA particularly for its critical role in the country’s dealing with crucial and challenging maritime concerns. He congratulated the entire DENR family for their collective efforts and enthusiasm in advocating the country’s significant maritime concerns. He expressed gratitude to Captain Hizon and Commodore Palma for their remarkable leadership. He also acknowledged the presence of the members of their families during the ceremony.

In his welcome remarks, Administrator Peter N. Tiangco first acknowledged the presence of DENR Secretary Paje in the commissioning ceremony. He then expressed NAMRIA’s gratitude to the present administration for giving the green light to expand the agency’s hydrographic survey capabilities with the acquisition of the two survey vessels. He underscored the newly acquired survey vessels as important assets of the agency.  He mentioned NAMRIA’s goal to provide timely and accurate hydrographic survey data updates necessary to ensure safety of navigation within Philippine waters, along with the availability of accurate and reliable geospatial information to effectively manage the country’s marine and coastal environment.

For his part, Subic Bay Metropolitan Authority (SBMA) Chairman and Administrator Roberto V. Garcia congratulated NAMRIA and DENR for their significant efforts to improve the navigational activities of vessels in the country particularly in Subic Bay.  SBMA Administrator Garcia recognized the importance of NAMRIA’s products like nautical charts and hydrographic survey services in ensuring the safety of domestic as well as international vessels navigating the waters of Subic Bay. He said that SBMA looks forward to a continuing partnership with NAMRIA and DENR and gives its full support and cooperation to provide haven to NAMRIA survey vessels in Subic port.

The newly commissioned modern catamaran-type hydrographic vessels which measure at 23.55 meters were built by the Colorado Shipyard Corporation in Consolacion, Cebu in March 2013. The vessels arrived at Bravo Wharf in Subic Bay Freeport Zone, Olongapo City on 21 July 2014 after a series of sea trials in the waters north of Mactan Island. Installed aboard both survey vessels are the following: the latest navigation and communications system; security and safety system; advanced survey systems and instruments/hardware; and hydrographic survey workstations. Both survey vessels can accommodate 22 crew members and have a VIP stateroom for visiting dignitaries.

The vessels have a maximum cruise speed of about 20 knots. A major activity lined up for the survey vessels is the hydrographic and bathymetric survey of Manila Bay in partnership with the Manila Bay Coordinating Office for updating of the Manila Bay Environmental Atlas.

After the commissioning ceremony, DENR Secretary Paje and Administrator Tiangco together with other key officials of DENR and NAMRIA boarded the survey vessels and sailed to Grande Island Resort for the DENR Executive Committee Meeting.

Staff from the Geospatial Information Services Division (GISD), Geospatial Information System Management Branch (GISMB) documented the milestone event. The GISD, GISMB prepared information materials such as the three-fold brochure about the vessels and individual flyers on the biography and achievements of the past two BCGS directors, copies of which were distributed to the guests.